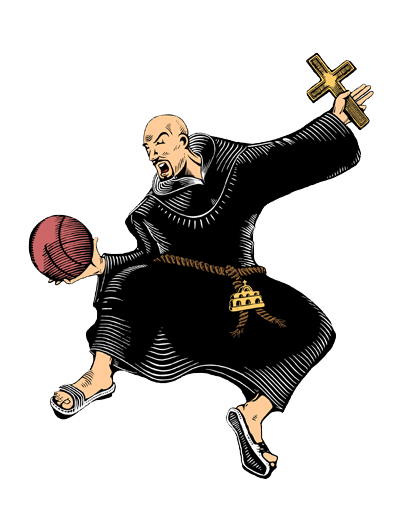 The first tournament in what became the Padre Serra Invitational was in 1959 and called the "Catholic Midget League Play Off."  It was held at Gesu Gym under the direction of Father Max G. Mankowski, S.J. and Jack Andrews, assisted by Joe Harden, Homer Cook, William Kucinski, and Don Sweeney.

Over the years, the invitational has grown in scope and number of teams and today is one of the longest running invitational basketball tournaments in the area.

The Padre Serra Tournament features the very best 8th grade girls and boys teams from throughout the Archdiocese of Milwaukee.

The Serra Club of Milwaukee is an organization whose mission is to nurture and provide assistance to those men and women who chose the path of religious life. Everyone you see here working at the tournament in a Serra Club shirt is a volunteer. The countless hours spent planning, setting up, and staffing for this acclaimed tournament are a tribute to the men and women who devote their lives to their ordained vocations.

While following and cheering for your favorite team(s) during the tournament, we respectfully request that you take a moment to reflect on the mission and purpose of this great tournament. Proceeds (admissions, concessions, programs and t-shirts) from the Padre Serra tournament provide financial assistance to candidates for the priesthood and those seeking religious life.